Trending Articles
The Middle House – Intimate Luxury in the...
The Surin Phuket – A Beachfront Resort Enclaved...
A Scenic Road Trip Through The Dolomites In...
My Week In Czechia With Hilton Prague &...
Skydiving in Prague at 4000 metres
My experience at Hotel Imperial – Karlovy Vary
Old World Luxury At The Four Seasons Prague
Florence In A Day
Summer Holidays at La Perla Corvara, Dolomites
My Weekend in Lisbon, Portugal
My Skydiving Adventure in California
Jungle Adventures At The High Ropes Adventure Park...
Home Travel & LeisureAdventure & Wildlife Climbing The O2 Arena – Alternative Things To Do In London

Climbing The O2 Arena – Alternative Things To Do In London

The O2 is a gigantic entertainment complex, the second largest arena in the UK, and the busiest music venue in the world. You might have visited the O2 for a concert, a game of bowling, or to grab a bite to eat, but did you know you can actually climb the iconic roof of it? This adrenaline-fueled activity gives you access to unparalleled views of London, but the journey to the viewpoint is just as thrilling as the view itself – if not even more so. 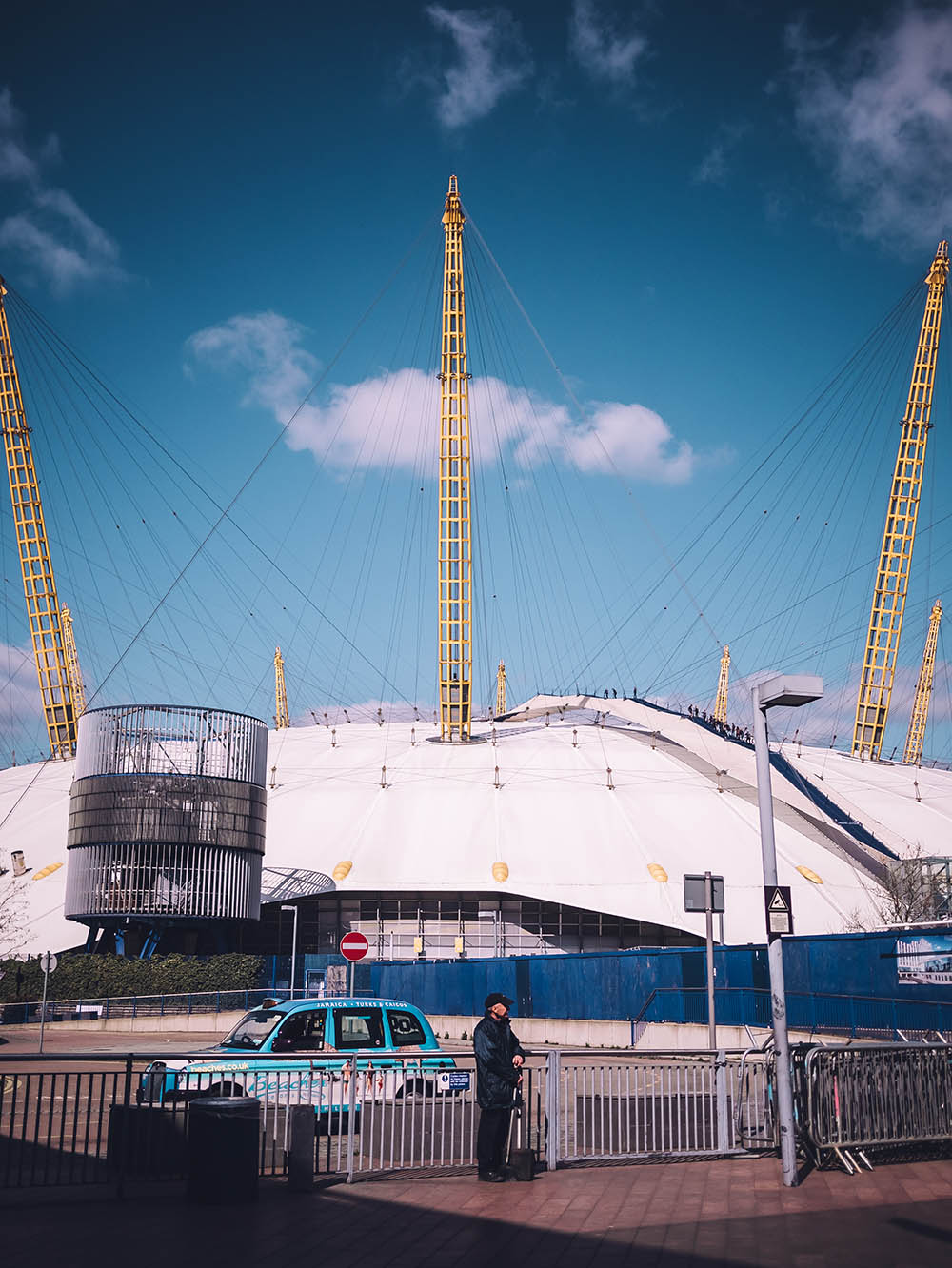 Up at The O2 opened in 2012 and since its inception, over 300,000 people have ascended the dome-shaped roof of this iconic structure, including the likes of Benedict Cumberbatch, Gordon Ramsay, and Muse.

This thrilling experience had been on my bucket list for quite some time, and when I was given the chance to tick this Bucket List worthy experience off your list, I jumped on it.

You are given the choice to climb the O2 either in the daylight, at sunset, or at twilight after the sun has set. This gives you the option to see a variety of different cityscapes.

Upon arrival at Base Camp, I was greeted by our climb guide, who would be accompanying us along our expedition. After a safety briefing, I geared up and was fitted into a protective climbing suit, climbing boots, and a safety harness. 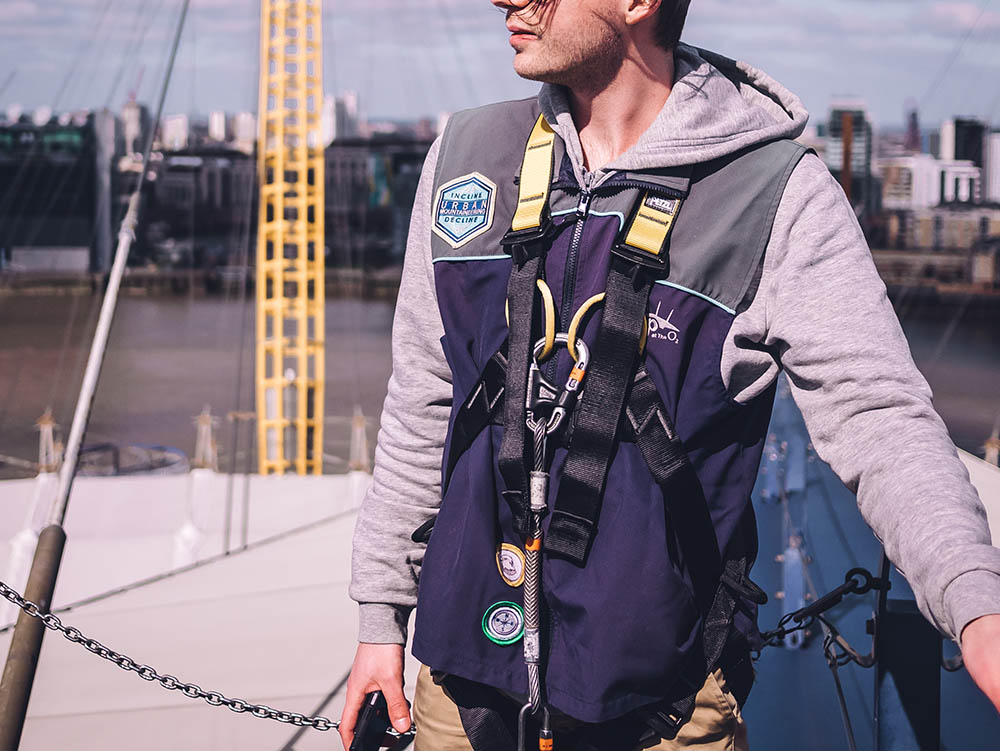 The ascent of the dome begins three storeys up, after which I followed a 380 metre long suspended walkway. The steepest part of the walkway is has a 28° incline, so it isn’t a fiercely tough climb, but just enough to get your heart beating in the most exhilarating way possible. Since the surface of the walkaway is constructed to emulate the tensile structure of the dome, which makes the walkway wobbly, much like a trampoline, I was awfully tempted to bounce. As the wind was blowing, I could actually feel the platform vibrate beneath my feet, which was an experience in itself! 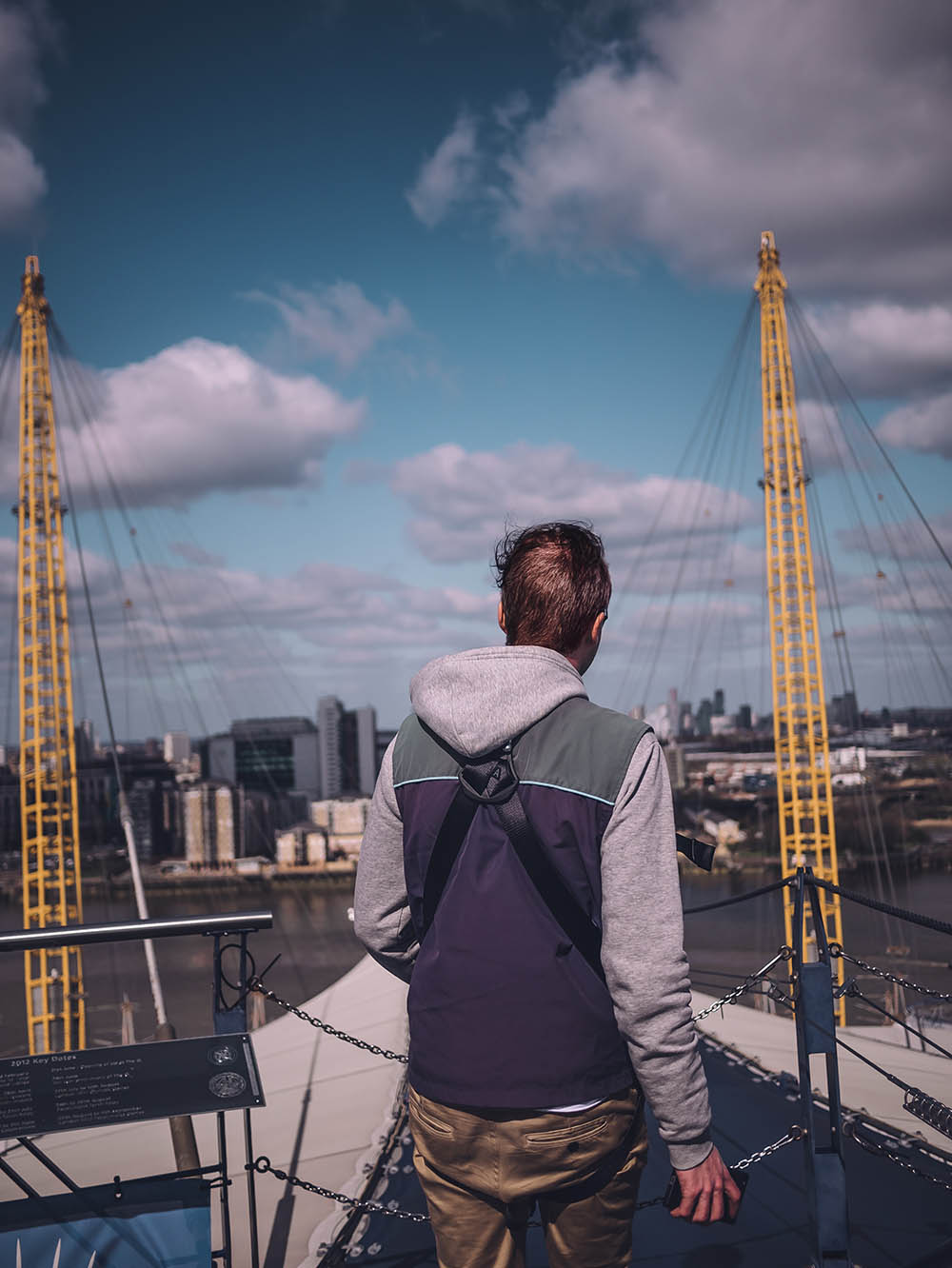 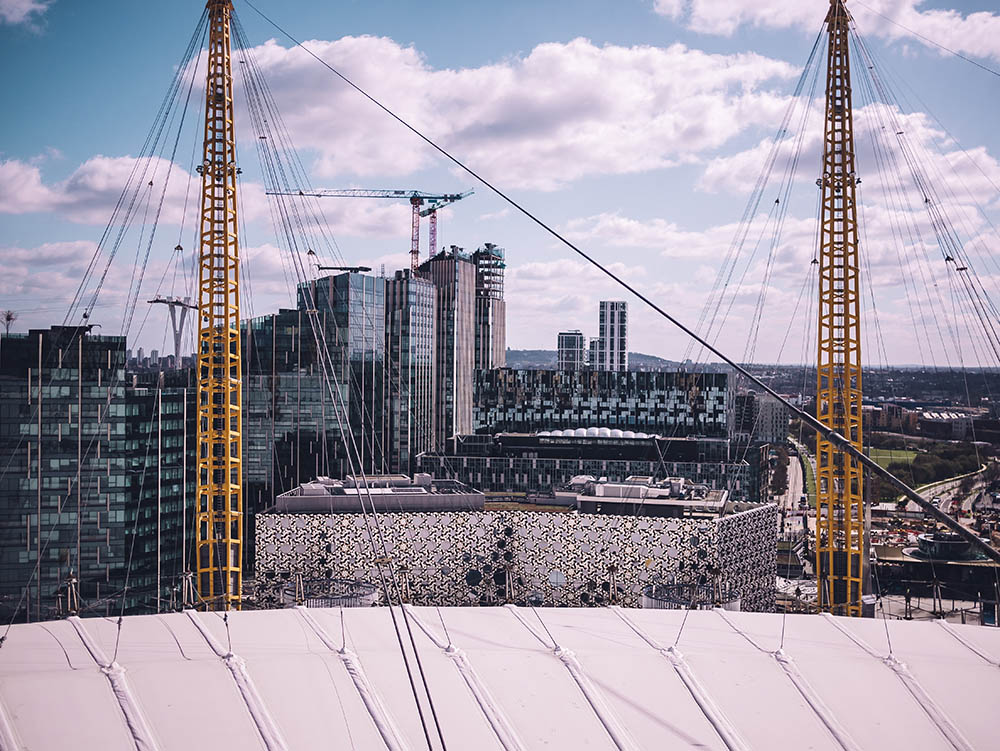 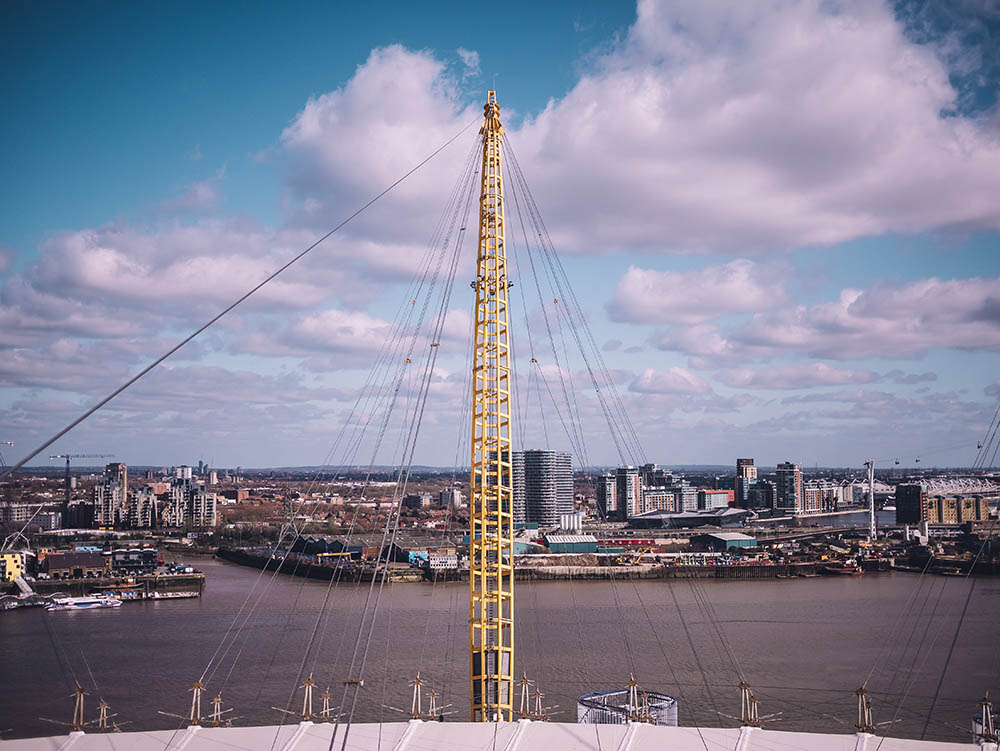 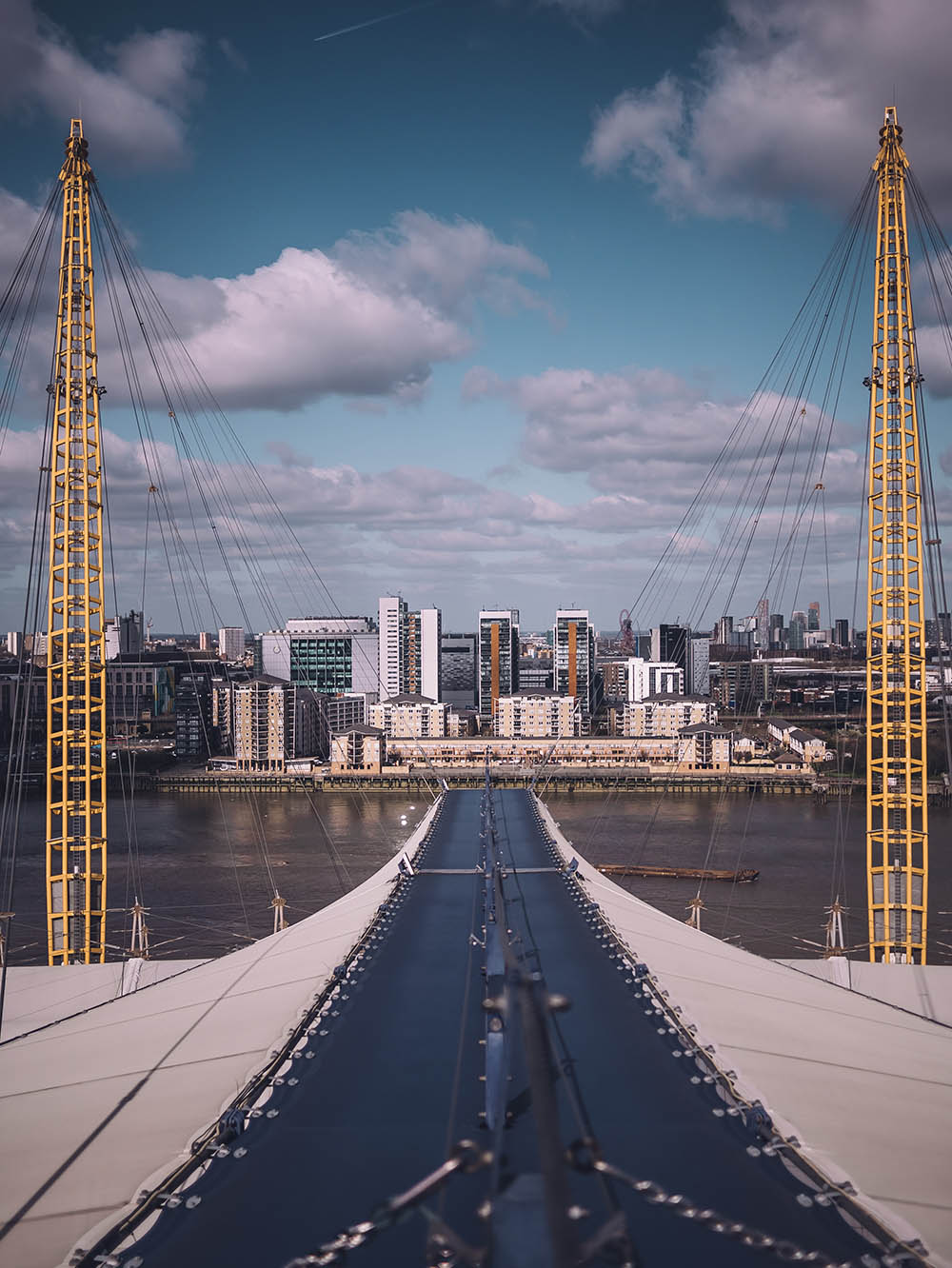 Once I had reached the top, I was unclipped from the safety rail and free to explore the viewing platform at the summit of the dome. I took in 360-degree panoramic view of the city, and was able to capture photographs of iconic buildings such as the Gherkin, Tower Bridge, and the Shard.

Up at the O2 offers one of the most fascinating ways to see London, and summiting this iconic structure is a phenomenal experience that you will long forget.

Do you enjoy adventure activities like these, and is it something you could consider doing on your next trip to a major metropole? Share in the comments below!

3 Quirky and Unusual Things to Do in London

A Scenic Road Trip Through The Dolomites In...

Why You Should Visit Amusement Parks As An...

3 Quirky and Unusual Things to Do in...

An Authentic Experience at Qiandao Lake, the Thousand...

Oh wow, I had no idea that you could climb this place! I remember first seeing it in the James Bond movie, “The World is Not Enough,” when Pierce Brosnan falls out of a hot air balloon and tumbles down, injuring his clavicle. So crazy! I’m not sure I’d be down to climb it, but I bet the view is just breathtaking, especially once you conquer the summit!

This sounds straight up my alley! I had no idea this was possible before reading your post, and I’ve been to London many times. Next time I’m there, I’ll definitely have to add an O2 climb to my itinerary!

I haven’t been in London, United Kingdom yet. I was really fascinated by the place because of Wimbledon, Gordon Ramsay’s restaurants and of course, Big Ben! I wanted to visit London so I can also climb The O2. It’s a great experience for sure and I know I can cherish the experience forever. I really hope I can also watch Wimbledon this summer. Rooting for Roger Federer!

You are so brave to have climbed the O2! I can understand the appeal of the magnificent views. I like that you can pick different times to climb and get a different view. I might be tempted to ask if I could stay clipped in at the observation deck though, haha!

I never knew about O2 and also that it is the busiest music venue in the world. Good to know about some unusual things to do in London. It must be interesting to climb O2 though I had no experience in climbing the buildings. The view from top are stunning.

I am a great fan of places that give 360-degree panoramic view of the city. The fun of photography doubles there. O2 looks very interesting. I have heard about it for the first time. The walkway with 28 degree incline sounds thrilling. Its thoughtful that one can enjoy different cityscapes in daylight, at sunset, or at twilight.

On this blog, we chronicle our escapades as we gallivant around the globe, from one scenic spot to the next. We share untold tales about the captivating beauty of each destination, serving you an exuberant mix of practical travel advice, in-depth guides on photography and a curated visual collection of mesmerizing places around the world. Join us as we embark on a visual journey down the paths less traveled.
• • •
Work with us // Get in Touch

The Middle House – Intimate Luxury in the...

A Scenic Road Trip Through The Dolomites In...

My Week In Czechia With Hilton Prague &...

Florence In A Day

Travel Lifestyle Blog
On this blog, we chronicle our escapades as we gallivant around the globe, from one scenic spot to the next. We share untold tales about the captivating beauty of each destination, serving you an exuberant mix of practical travel advice, in-depth guides on photography and a curated visual collection of mesmerizing places around the world.

A Scenic Road Trip Through The...

My experience at Hotel Imperial –...